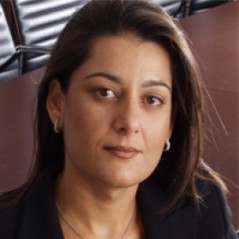 Louisa Massonidou is an advocate and Deputy Managing Director of the Firm.
She specialises in Corporate Law, Commercial Law, Contract Law, Admiralty and Maritime Law, Trademarks, International Tax Planning, Trust Law, Administrative Law and General Practice.
Prior to becoming Deputy Managing Director, Louisa served as the Head of the Litigation Department at Christodoulos G. Vassiliades & Co between 1993 – 1996 and as Head of the Corporate Department of the Firm between 1996 and 2002. While acting as Head of the Corporate Department, Louisa held the post of Deputy Managing Partner at Christodoulos G. Vassiliades & Co. until 2008.
She was appointed Deputy Managing Director in the beginning of 2009, when the Firm was converted to a Limited Liability Company.
Louisa is also a client member of the European Bar Association and the International Tax Planning Association. Moreover, she has been appointed by the Belize International Services Commission as Deputy Registrar of the International Merchant Marine Registry of Belize (IMMARBE) in Cyprus and Greece.
Louisa achieved an LLB at the Athens University in 1992. She was called to the Cyprus Bar Association in 1993.
She speaks Greek and English.